In an effort to improve my forensics skills I have been working through publicly available forensics CTFs when I have some free time.

The 2019 Unofficial Defcon DFIR CTF was created by the Champlain College Digital Forensics Association and made public by David Cowen on his Hacking Exposed Computer Forensics blog. The CTF covers Windows and Linux “dead” forensics, a “live” triage VM, memory forensics, and a cryptography challenge. This write-up focuses on the memory forensics questions.

Links to the CTF files and registration/scoreboard can be found on this HECF blog post.

The following MD5 hash was provided for the Triage-Memory.mem file:

flag 1 – get your volatility on 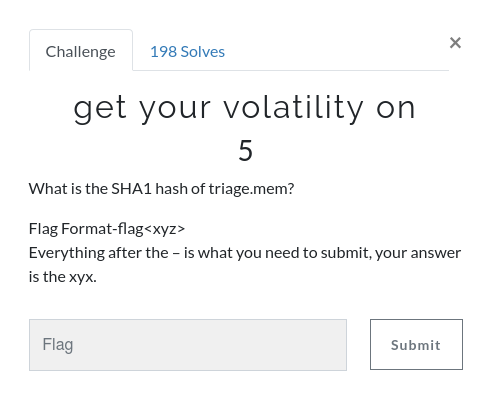 We begin with a straightforward one; calculate the SHA1 hash of the memory image. 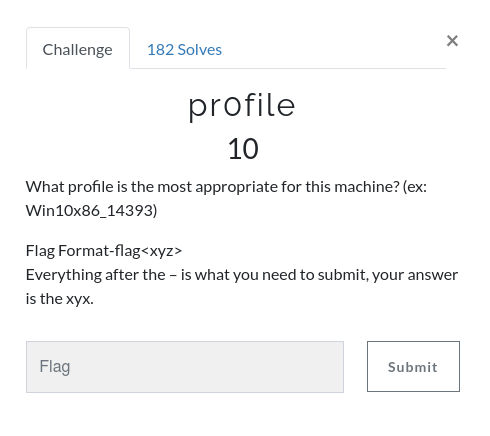 Again, reasonably simple. We need to work out which profile to use with Volatility to conduct our analysis. The imageinfo plugin will suggest a number of suitable candidates.

The output lists a few possibilities, but Win7SP1x64 is a sensible choice for now. 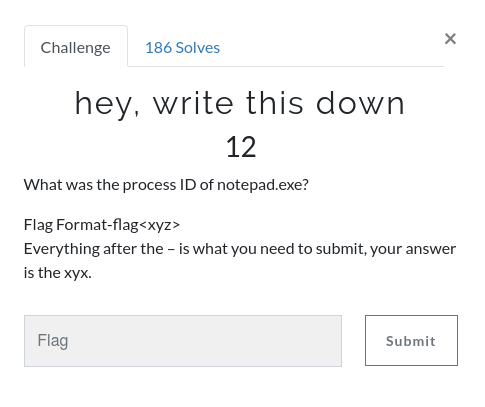 There are a few Volatility modules we can use to list running process IDs. My personal preference is pstree just because it makes the parent/child relationship more obvious, which can help to spot anything unusual. 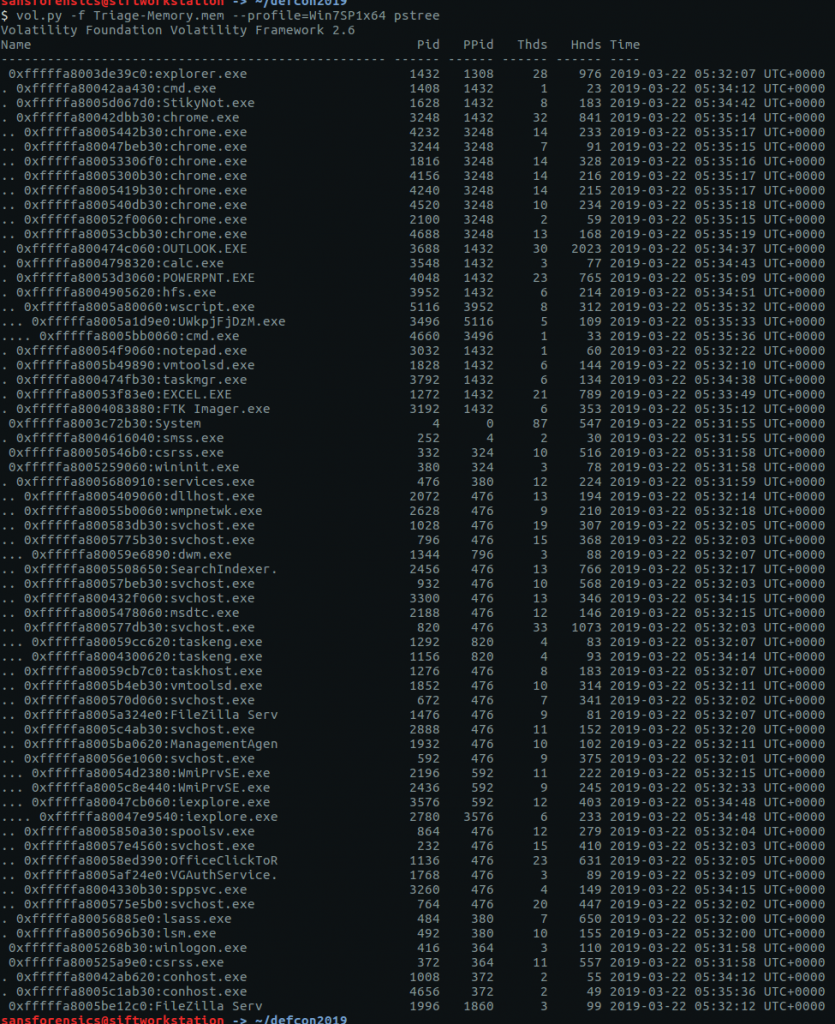 We are looking specifically for notepad.exe so we can cut out a lot of the unrelated output using grep

Using grep to filter the output we can easily see that the PID is 3032. 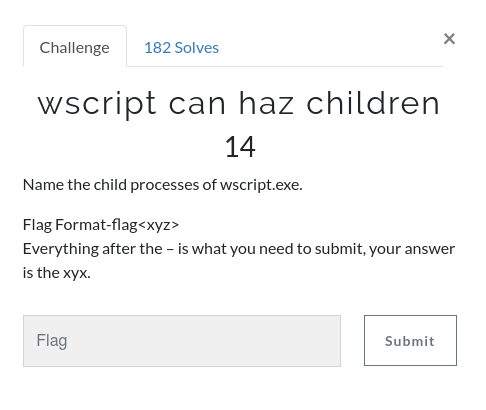 We already have the answer to this from the pstree output in Flag 3, but using grep as a filter will make it easier to spot. The -A 2 option tells grep to display the matching line and the 2 lines that follow it.

The output shows that wscript.exe has one child process, UWkpjFjDzM.exe, which itself has a child process called cmd.exe; a good indication that something is wrong there. 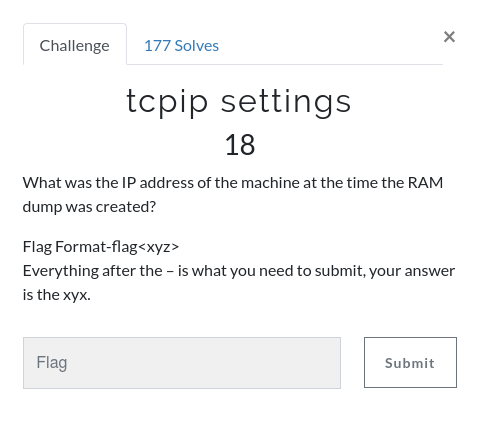 The question asks for the IP address of the machine when the memory dump was taken. The netscan plugin will show details of network artefacts captured in the memory dump. 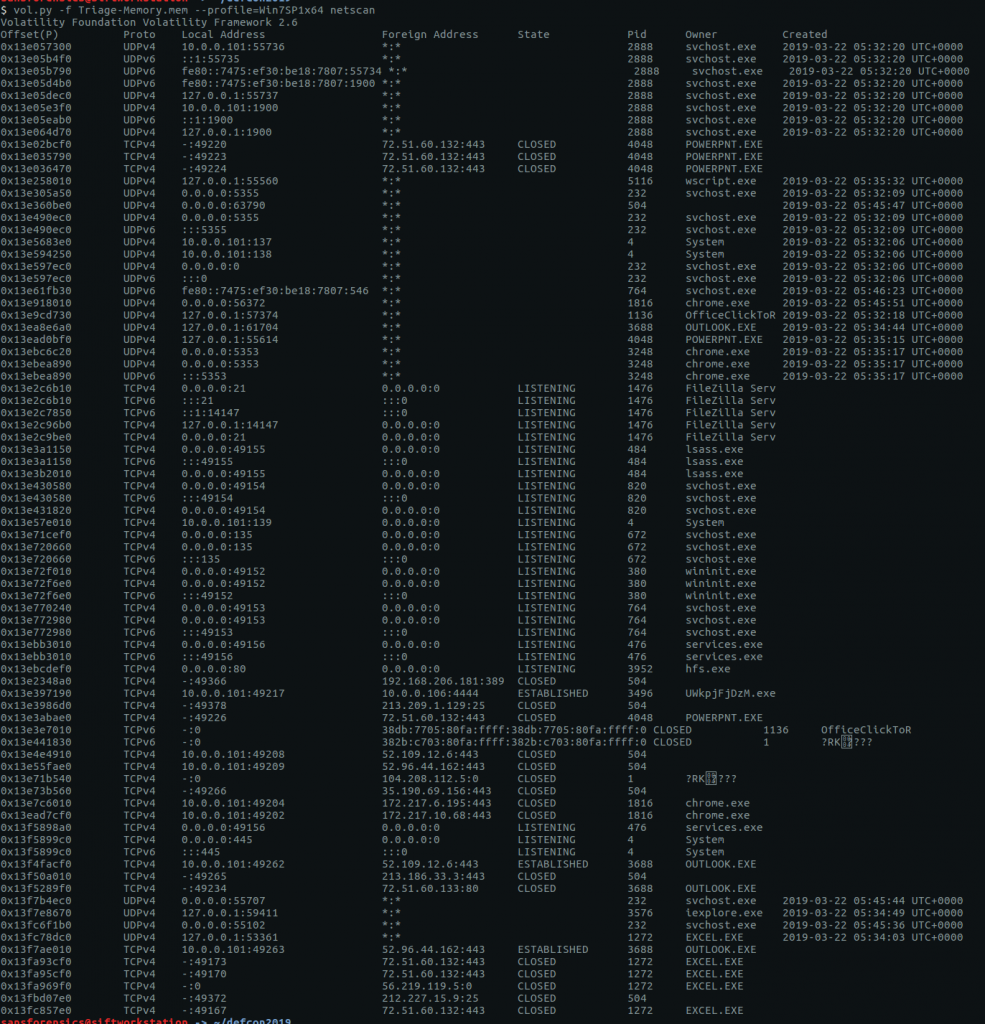 The question asks for the IP address of the machine at the time of the memory dump. We can see processes listening on addresses 0.0.0.0 and 127.0.0.1, which are unlikely to be our flag, and 10.0.0.101 which is a much more likely. Another interesting observation is that our process from Flag 4 is connecting to another machine on port 4444 – the default port for many Metasploit payloads. Keep that in mind for later. 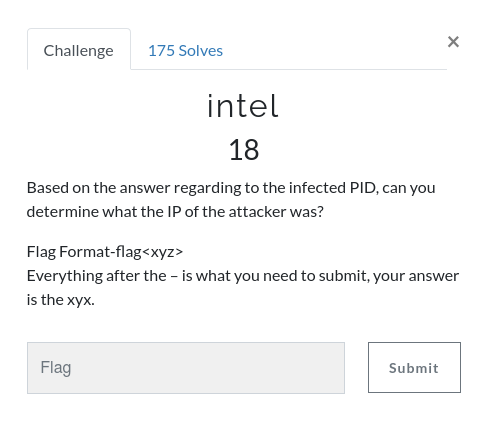 Based on our work to find Flag 4 and Flag 5, we can answer this quite easily. Let’s examine the netscan output more closely. 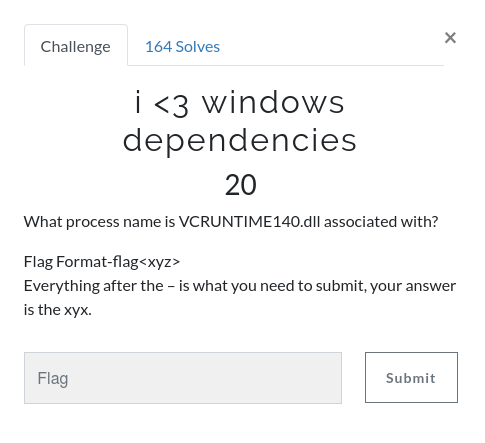 As the name suggests, the dlllist plugin will list the DLLs loaded by each process. This is a lot of output, so to find the answer I used grep with increasing values for the -B option to show the associated process. Not very subtle but it worked! 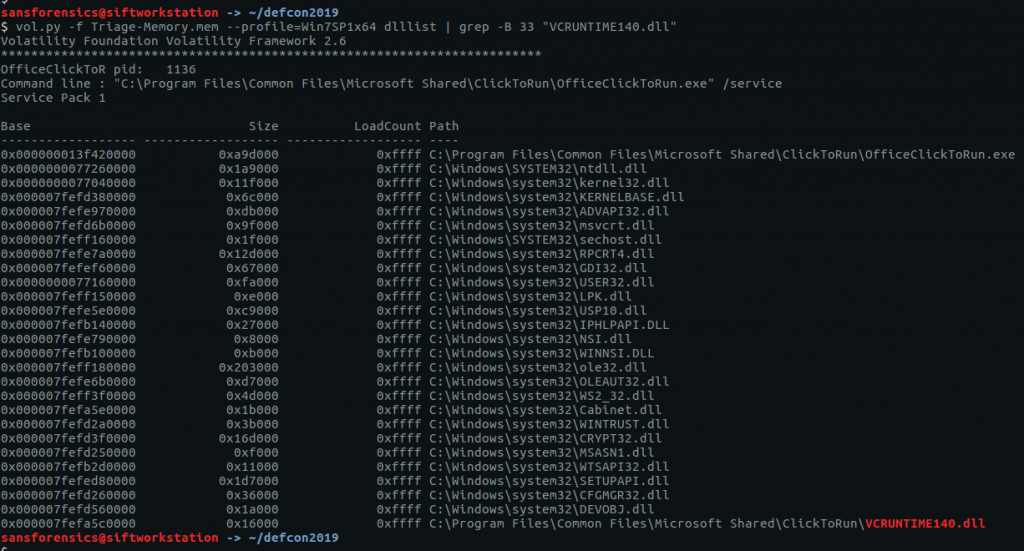 There we are! Initially I submitted OfficeClickToRun.exe as the flag, but when that was rejected I tried the short name (OfficeClickToR) next to the Process ID near the top of the output. 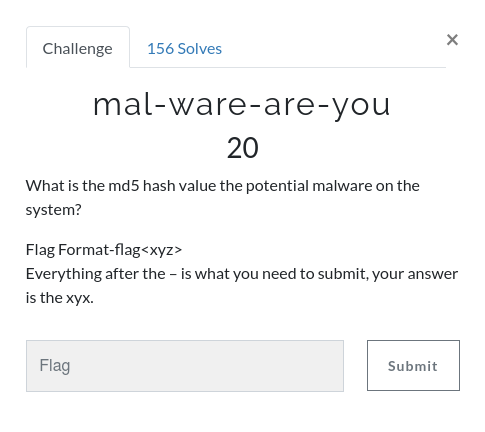 Ok, we have already identified our potential malware from Flags 4, 5, and 6. So take its PID (3496) and dump the executable using the procdump plugin, then calculate the MD5 of the extracted binary. 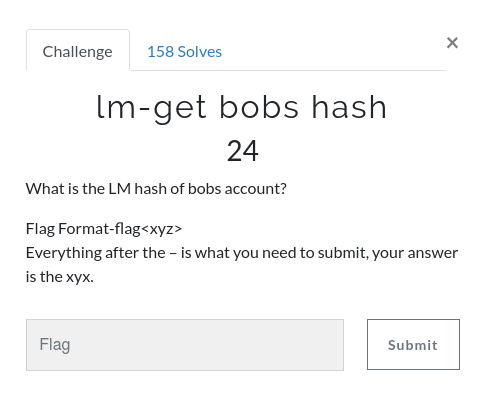 Another relatively simple one. The hashdump plugin will, predictably, dump the password hashes from memory.

We need to supply the LM hash, which is the first portion of the hash after Bob’s user ID (1000)… 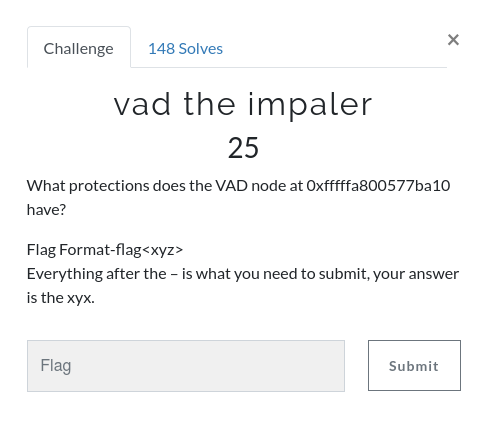 Information on VAD nodes can be extracted using the vadinfo plugin. It outputs a lot of data, so for ease of reading I’ve used grep to focus on the lines we are interested in.

We can see the VAD node at offset 0xfffffa800577ba10 has the PAGE_READONLY protection. That’s our flag. 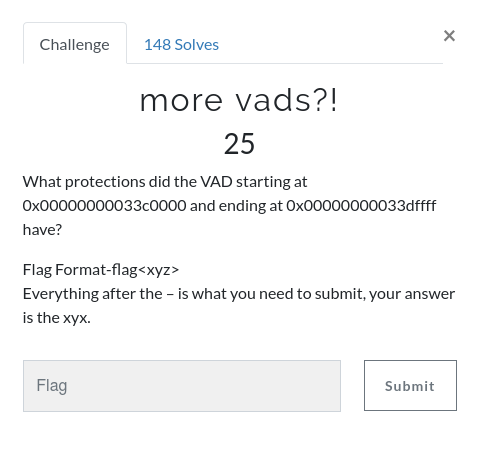 This is essentially the same question as Flag 10, just with a bit of extra grep. Instead of filtering on the starting offset, we filter on both start and end.

This time the protection is PAGE_NOACCESS. 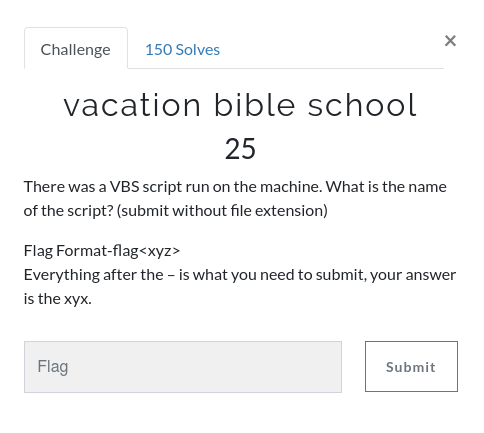 We are looking for a VBS script now. There are a few ways we could do this but the easiest is simply to check the command-line used to start the wscript.exe process that we observed in the pstree output for Flag 4. We know the wscript.exe PID is 5116, so we can pass that to the cmdline plugin to reduce the reading we have to do.

We can see that wscript.exe was called with a script called vhjReUDEuumrX.vbs from the %TEMP% directory. Strip the extension and we have our flag. 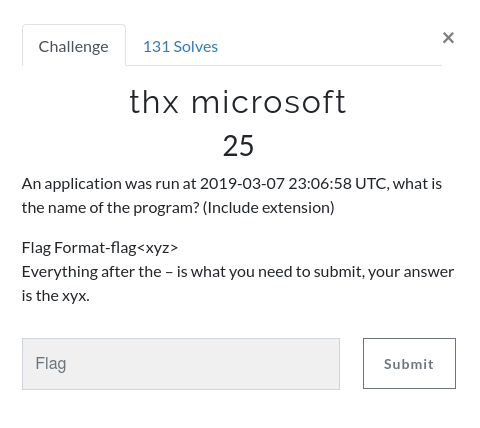 The Application Compatibility Cache (or shimcache) contains details of program execution and can be parsed using the shimcache plugin. We are looking for an application executed at a specified date and time, so we can use grep to filter the output.

This time we need to include the file extension. 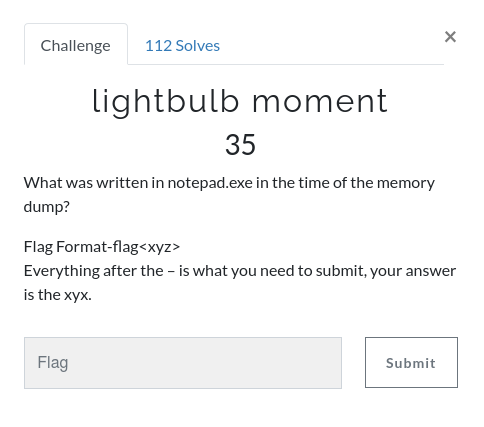 Extracting the text from a running notepad.exe process is relatively straightforward but does require a couple of steps. First we need to dump the process memory using the memdump plugin; we found the PID for notepad.exe in Flag 3 (3032). The next step is to use the strings utility to extract all of the human-readable little-endian strings and write them to a file.

Once we have our strings output we can use grep to search for our flag. The word “flag” seems a reasonable place to start. 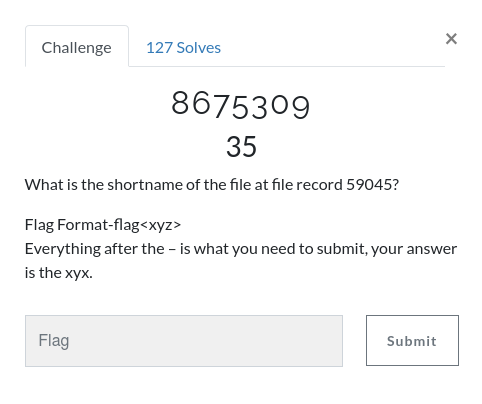 Details about file records are held in the Master File Table (MFT) and can be extracted from the memory dump using the mftparser plugin. We are specifically looking for the Short Name of the file at record 59045; once again, grep will help us here. 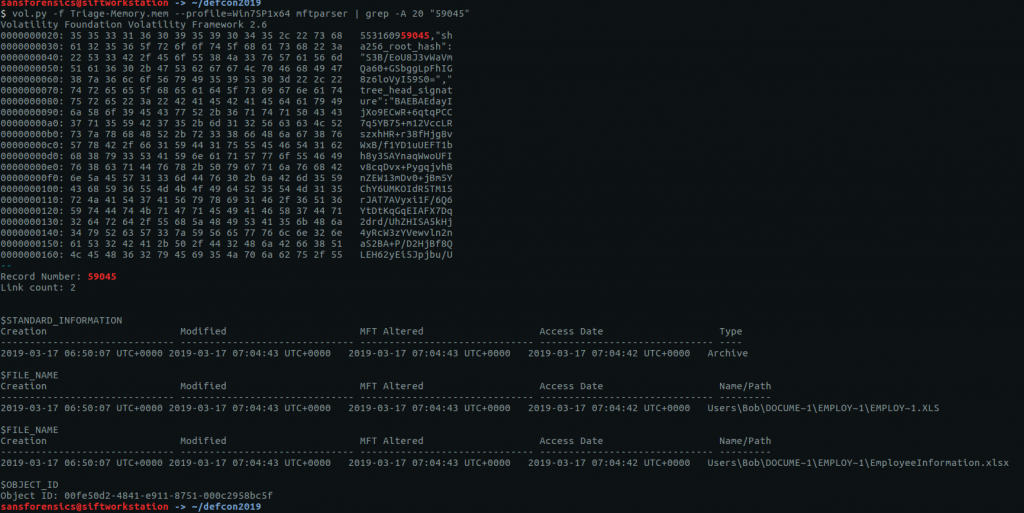 Reading through the output we can see the 8.3 short file name EMPLOY~1.XLS. 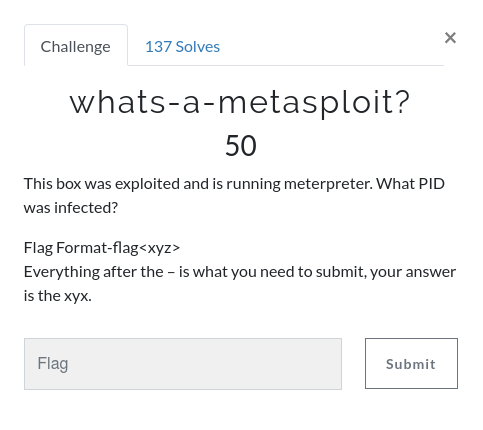 We can be pretty sure that UWkpjFjDzM.exe (PID: 3496) is our Meterpreter process, given what we found out answering Flag 4, 5, and 6, but let’s make sure. First we dump the process executable using the procdump module, then calculate its SHA1 hash so we can search public sandboxes like VirusTotal. 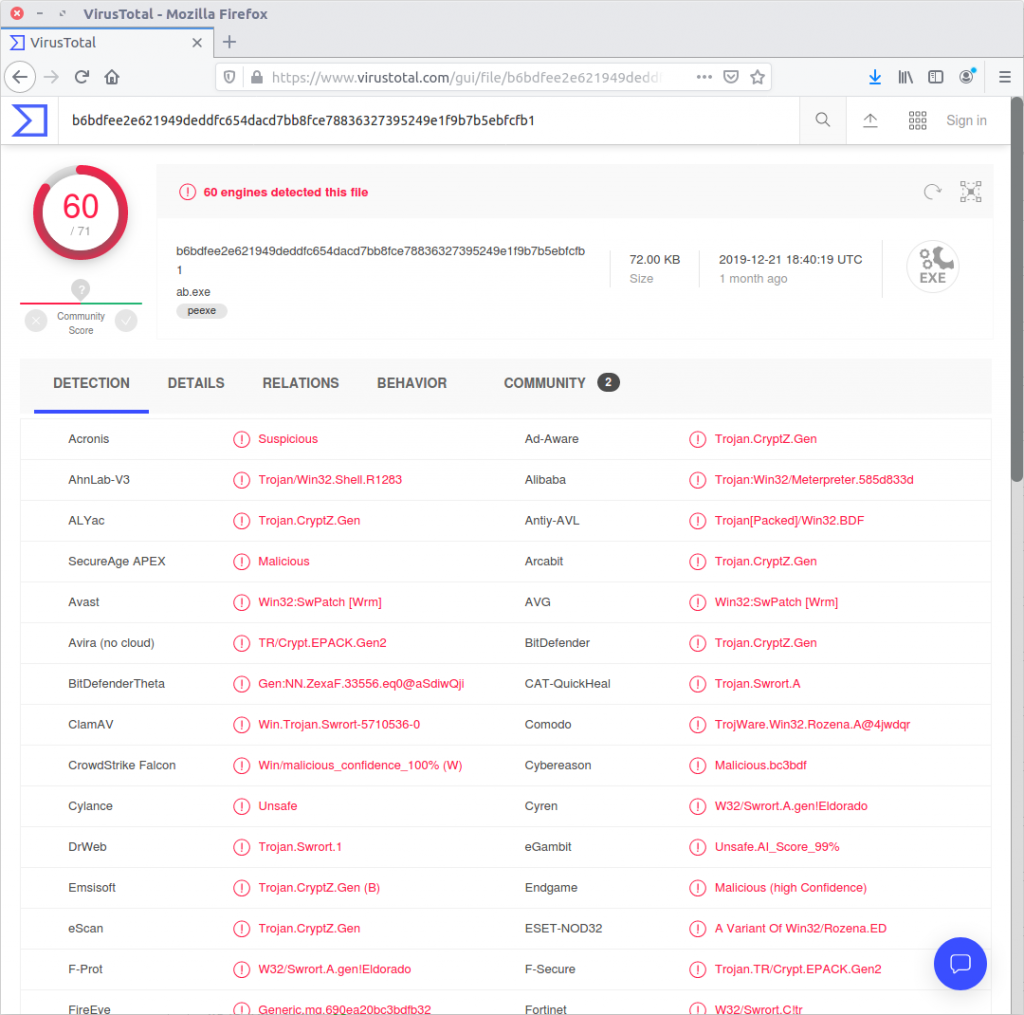 We submit the process ID (3496) and we have completed the memory analysis section! 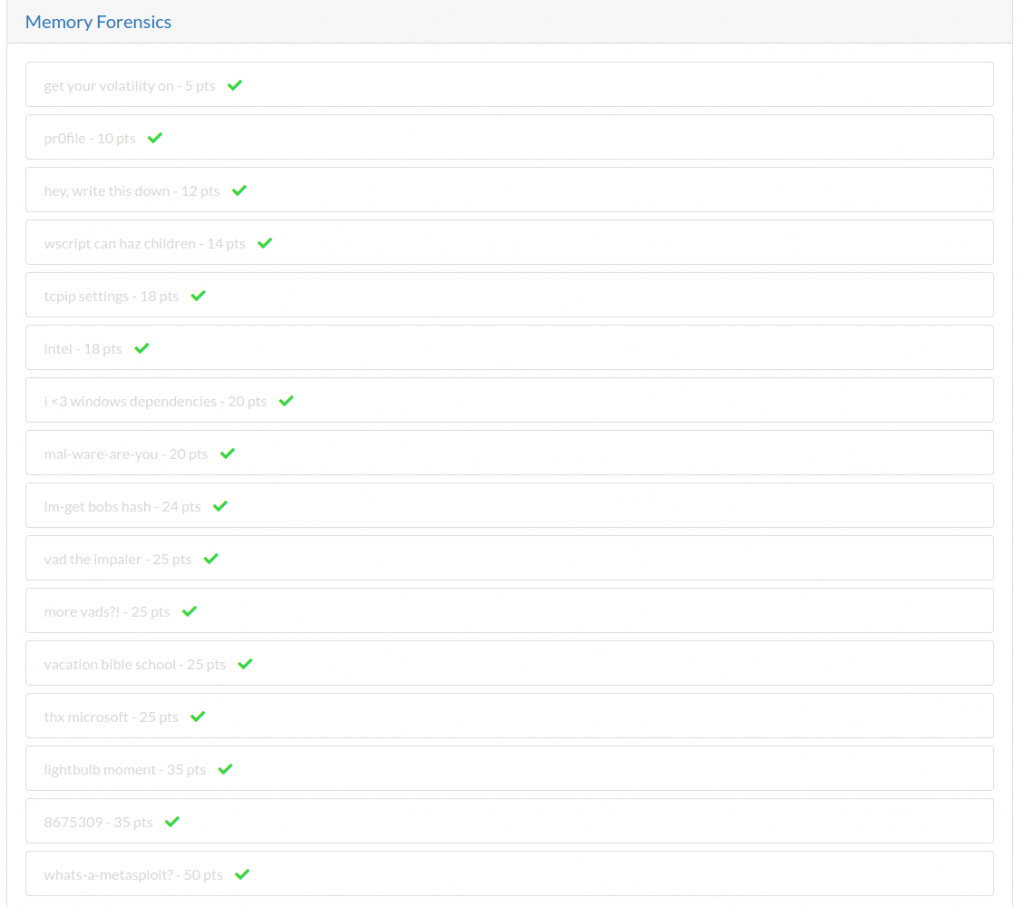 This is a really well put together set of challenges, and when I have more time I will probably return to take on the Windows and Linux challenges as well.