The Week 3 challenge really increased the difficulty, involving a bit of file carving to determine the location a photograph was captured. This week though I mostly relied on luck. And grep.

Chester likes to be organized with his busy schedule. Global Unique Identifiers change often, just like his schedule but sometimes Chester enjoys phishing. What was the original GUID for his phishing expedition?

I really had no idea where to start with this one. Calendar data? ALEAPP says no. I decided to simply extract the evidence TAR file and grep through the dump for phish saving the output for later with tee. 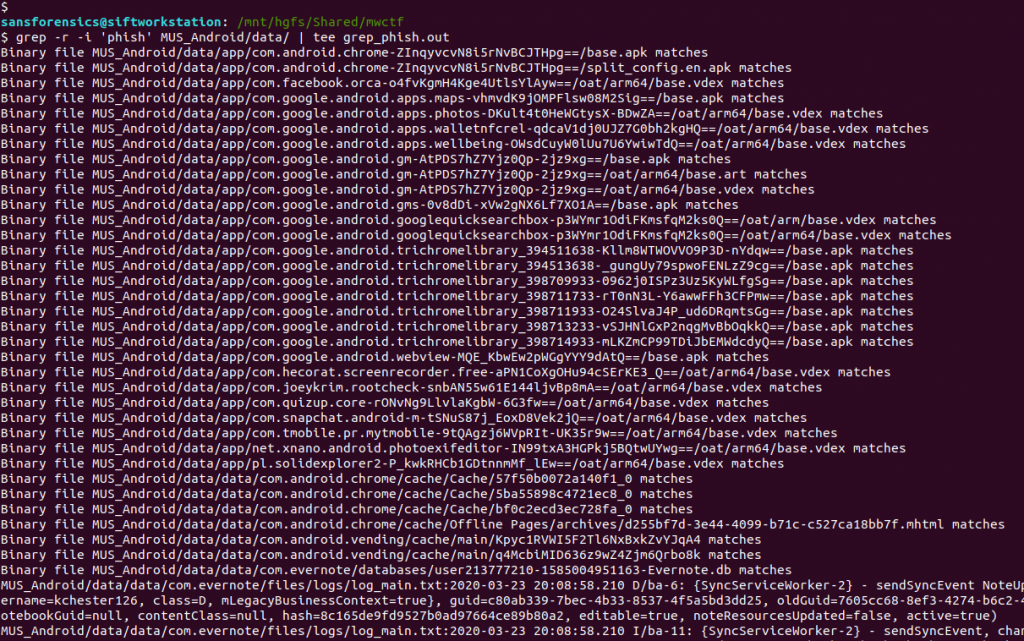 Not a bad start. We have a lot of matches in binary files so let’s exclude those from the output and see what’s left.

Better! We have a few matches in a log belonging to the Evernote application, and we might even have our answer already!

As with Week 3, we only have three attempts to answer this so let’s dig into the log file and see what else we can find.

The oldGuid key appears four times, along with timestamps; the question asks for the original GUID, presumably the earliest one in the file. We can use grep again to show only the lines relating to our phishing note.

The first hit is the earlier of the two so things are looking good. The screenshot below highlights the oldGuid value.

I think that’s probably enough to verify that we at least have a reasonable answer before burning one of the three attempts. Submit the oldGuid value and we have successfully completed the Week 4 challenge!